Have you heard of elephant toothpaste?

You see, elephant toothpaste is a science experiment. The kind of experiment that middle school teachers show their students.

And what makes it so fun to watch is the spectacle of it… how just a few tiny ingredients mixed together can make such a huge splash.

Teachers pour just half a cup of hydrogen peroxide into a flask (*The heads of the middle schoolers perk up a bit*).

Then in goes about a tablespoon of regular old dish soap (*The class is still skeptical*).

The teacher smiles, takes a small step back, and puts on his safety goggles (*Each kid’s eyes are practically popping out of their head in anticipation*).

Then slowly, carefully, the teacher drops in a small container of liquid and…

The flask erupts with foam, sending puffy tubes of white snaking high into the air as the class bursts into cheers.

That liquid in that small container was potassium iodide.

And in this experiment, it’s what’s known as a catalyst—an element that speeds up a chemical reaction.

It’s a tiny change that can lead to an enormous difference.

And like elephant toothpaste, making just a few little tweaks to your sales funnel can lead to huge jumps in conversions. If you know what changes to make that is.

Today, that’s exactly what you’ll learn from this article. Teensy little changes you can make to your sales funnel that can net some seriously mammoth jumps in conversions. 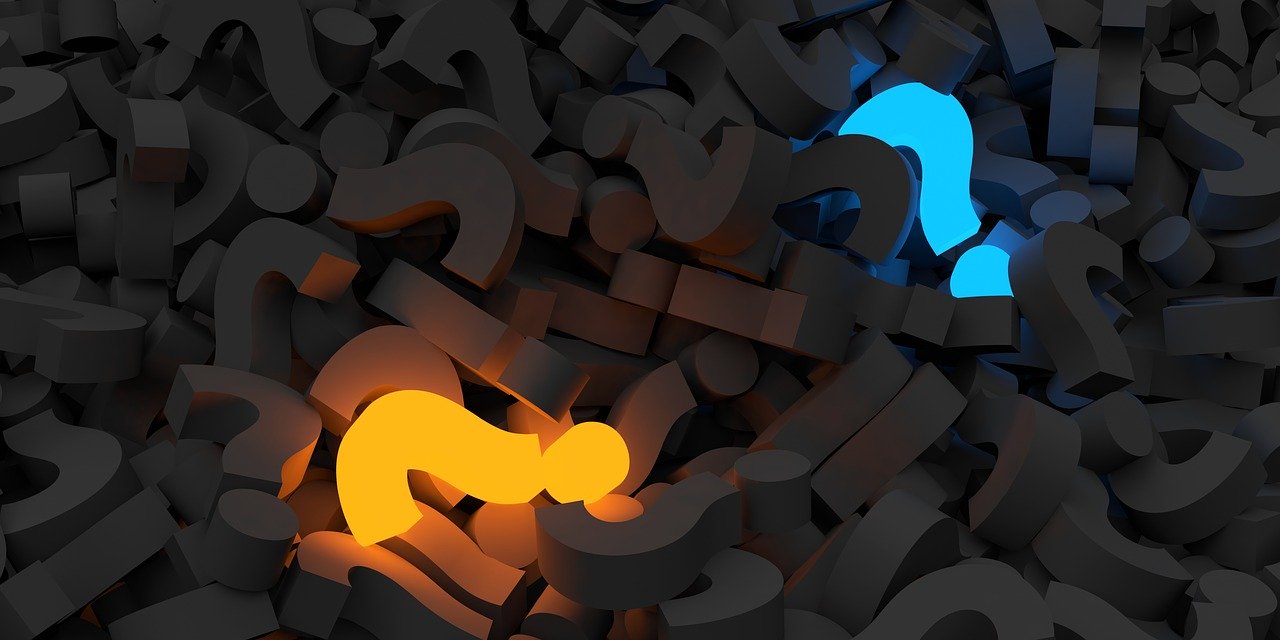 Before we jump into the small optimizations that can lead to some pretty big wins, let’s take a sec to answer this question…

Why should you optimize your funnel?

Of course the goal behind optimizing your sales funnel is to get more conversions.

More leads. More sales. More more out of your funnel.

But optimization isn’t always just about the “more more.” And in fact, there are a few other reasons to optimize that you may not realize.

Now, before you can start optimizing your funnel to suit your goal, you’ve got to have a few basic tools and functionality in place first.

For seasoned digital marketers and online retailers, this section might be a bit of a no-brainer. But even still, be sure to go through the quick list below to make sure you’re completely covered anyway.

Alright, now that the basics are covered, let’s get into what you’re all here for: the optimization tweaks you can do in as little as one afternoon! 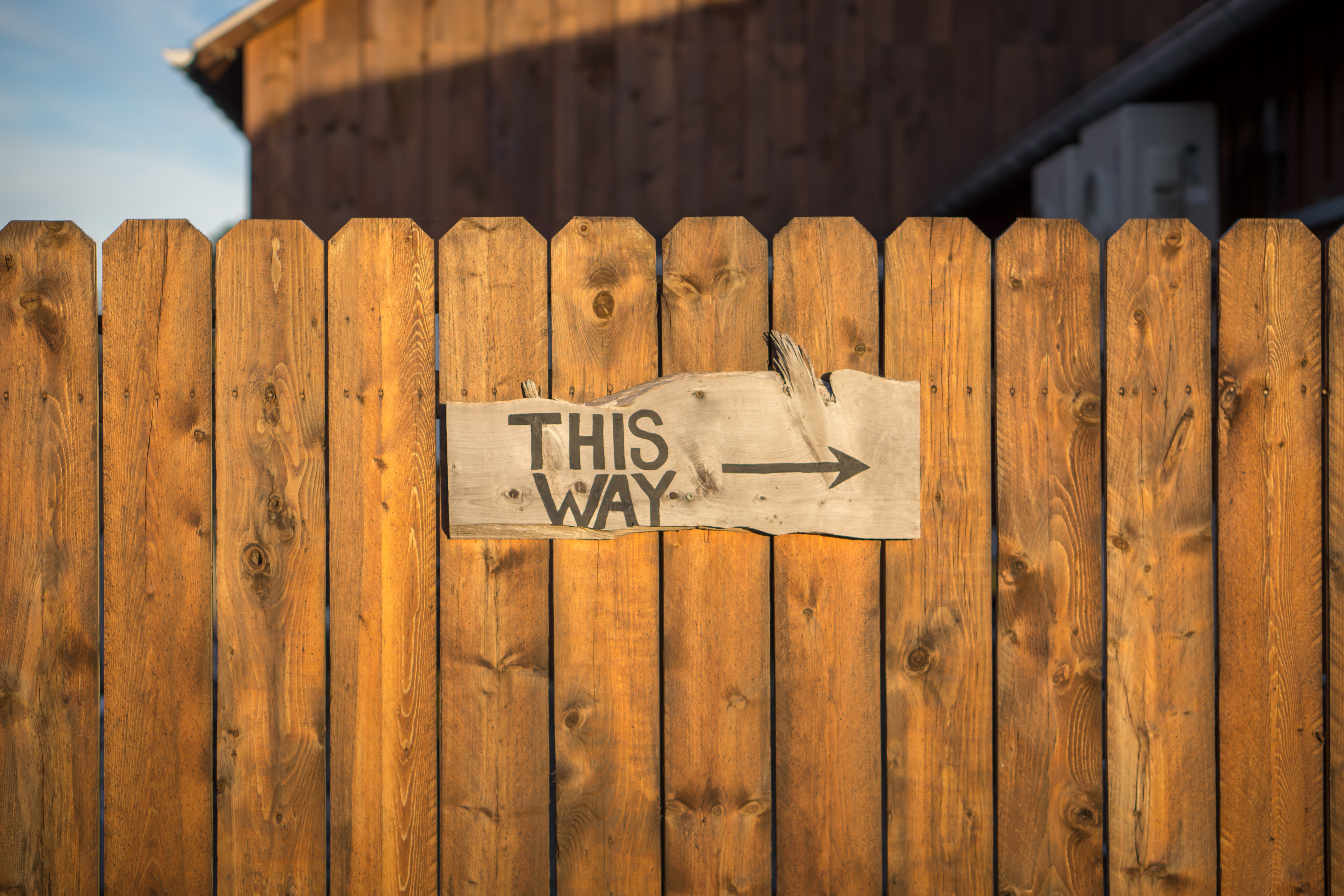 First and foremost, let’s begin with what is arguably the most important element of any and every sales funnel…

For as much autonomy and independent thought that people are capable of, most of us are more lemming than man (or woman).

And to make matters worse, most of the time we don’t even realize we’re doing so. Sure, we go through the process of weighing pros and cons in our mind in order to come to rational decisions. But in fact, a lot of the time the decision’s already been made by our subconscious long ago.

It’s the driving force behind the old marketing adage, “People buy on emotion and justify with logic.”

And that is why you need to make your CTA as visible, clear, and magnetic as possible.

Because the perfect customer will be able to figure out how to get in touch with you or the next steps that they need to follow. But for everyone else (me included), you simply have to spell it out for them. And if you don’t, your funnel may be leaking leads.

Let’s take a look at 3 CTA examples from the 311 case studies in our Proven Sales Conversion Pack.

Example #1: Add the word “Free” onto the CTA button (even if it’s already in the headline). 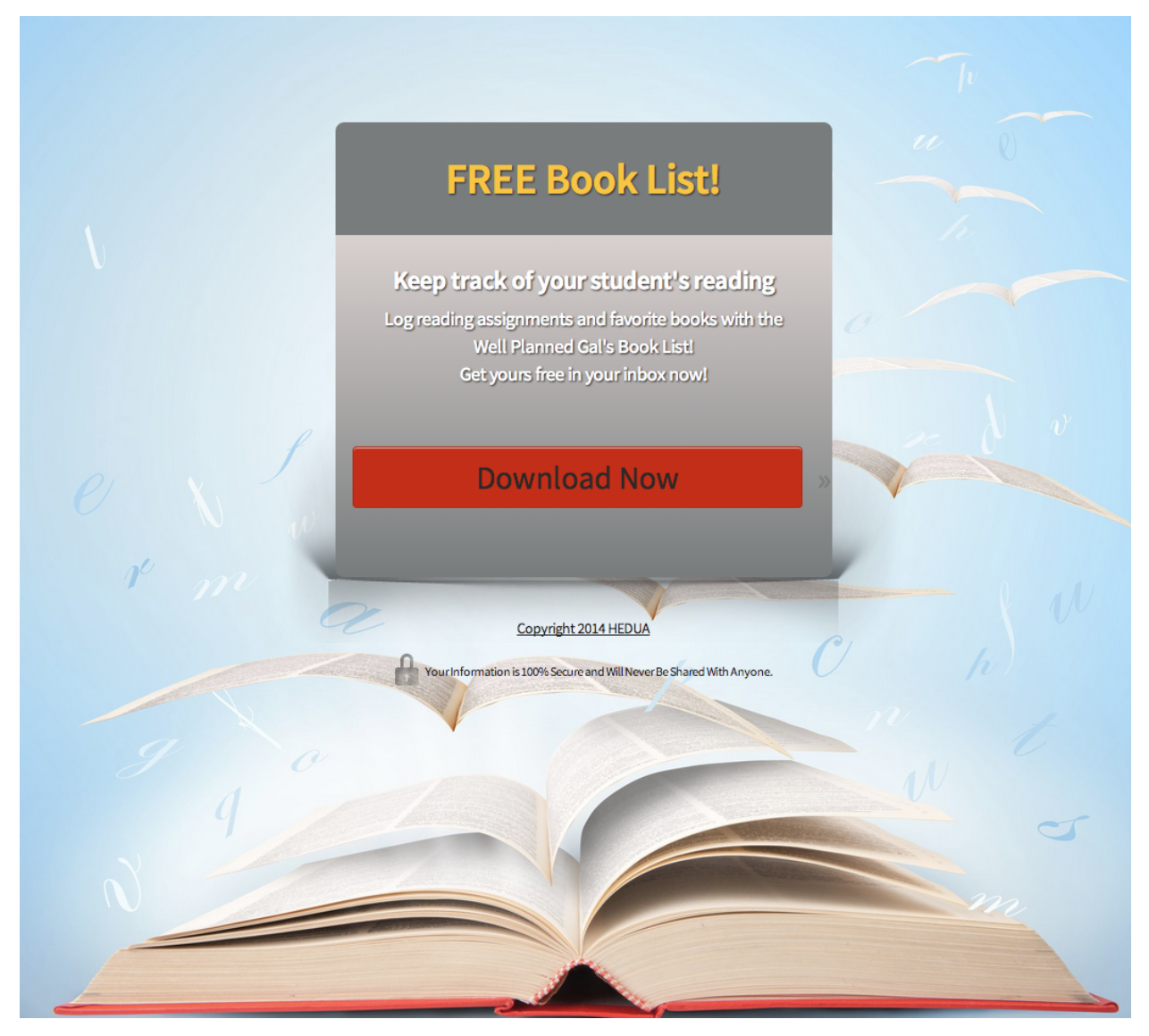 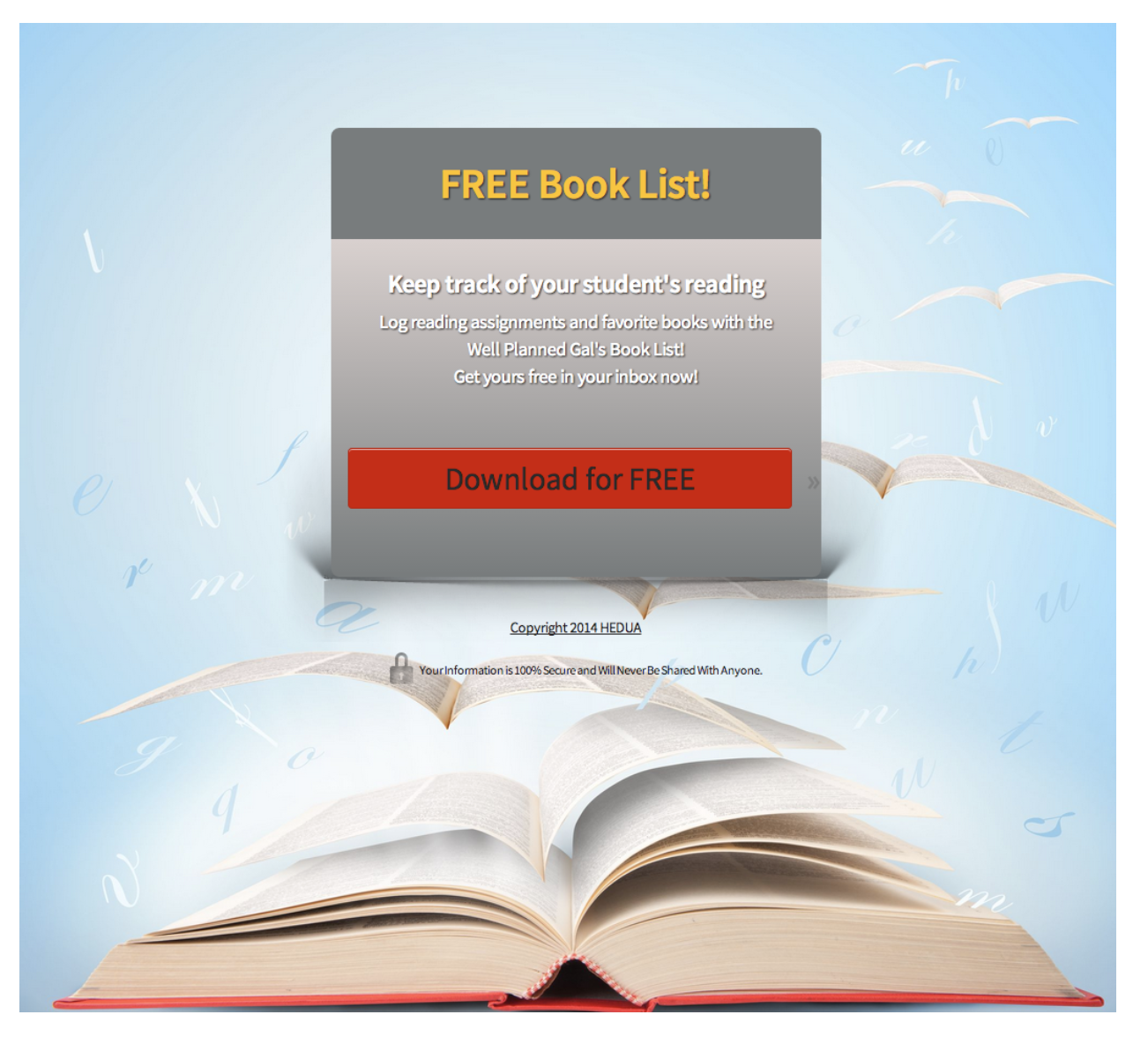 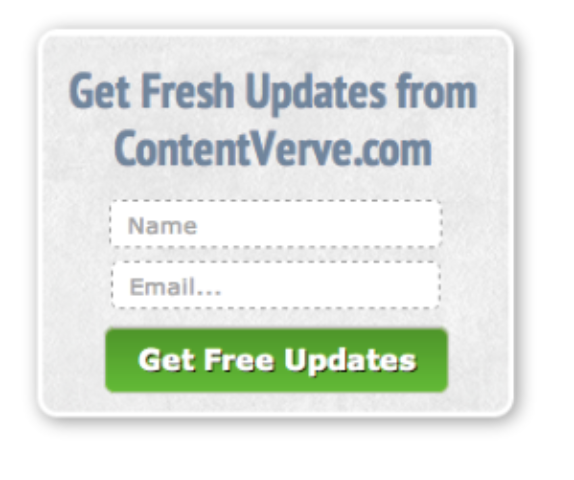 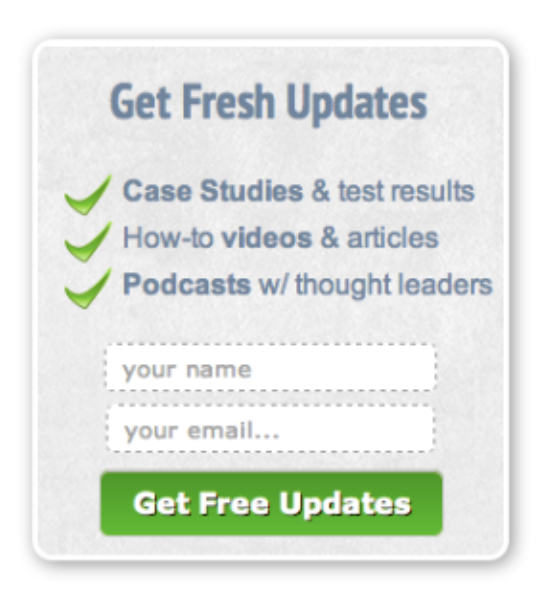 Example #3: Make your CTA really stand out visually. Green is the go-to color since it’s the easiest to see but it may also connect with your audience on a subconscious level (what color is money anyway?). 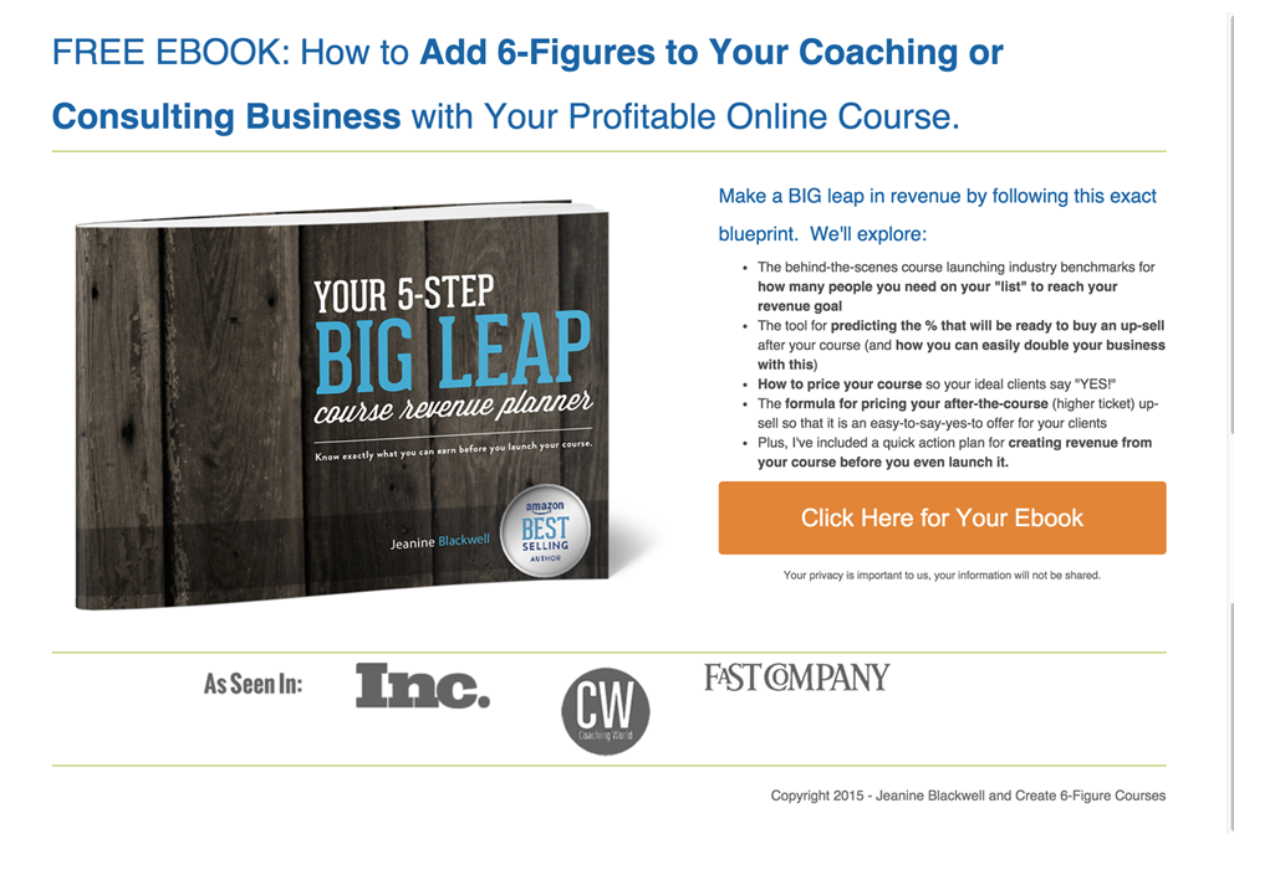 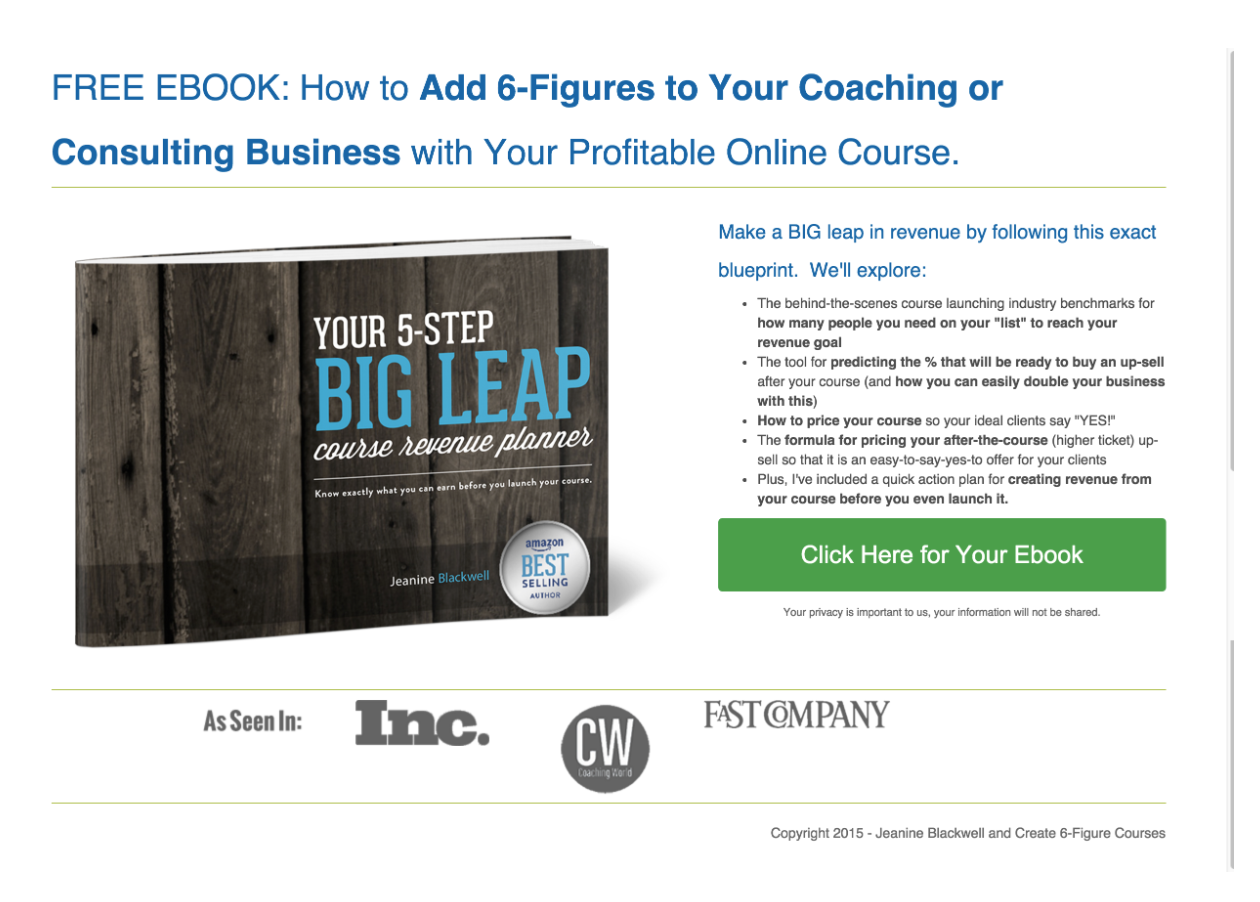 So there you have it! Be sure to make those CTAs stand out so your audience knows exactly what they should be doing. And when you attach value in the copy too, it’ll make your CTAs downright irresistible.

Maybe you saw this one in Matt’s (founder of AutoGrow) video above. But even if you did, it’s worth repeating.

Reframing your lead magnet is an especially simple yet powerful way to give your conversion rate a kick in the pants in no time at all.

Here’s the gist of it.

So as you probably already know, a lead magnet is a core asset for a sales funnel. A lot of the time, it’s the very first step that actually brings your prospects in. You offer a low-commitment item of value for free, and prospects tell you a little bit about themselves in order to get their hands on it.

Most funnels use this technique to first gain access to an email address that you can later use to nurture that lead into a customer.

But since it’s also usually one of the only entry points, a lead magnet with low conversions can cause a serious bottleneck for the rest of the funnel.

Solution? Try reframing it as another kind of lead magnet.

It’s easier than it sounds, I promise.

You see, one of the 7 Laws of Funnel Physics is the Law of Alignment. When prospects move through your funnel and their expectations are met at every step of the way, your funnel’s well aligned. And that leads to better conversions.

But in that same way, your lead magnet has to align with the unique preferences of the customer themselves. And that means offering the right kind of lead magnet for them can make it all the more clickable.

So let’s say your current lead magnet offer is a checklist. Experiment with positioning it as a guide. Or your whitepaper as an eBook.

In most cases, making the switch is as simple as adding in a few new bullet points, popping in a header or two, or removing a particularly dense chunk of text.

And then A/B test the new version against the old one. You may be surprised at how awesome the results are.

Funnel Optimization Tweak #3: Add Some Humanity to Your Funnel 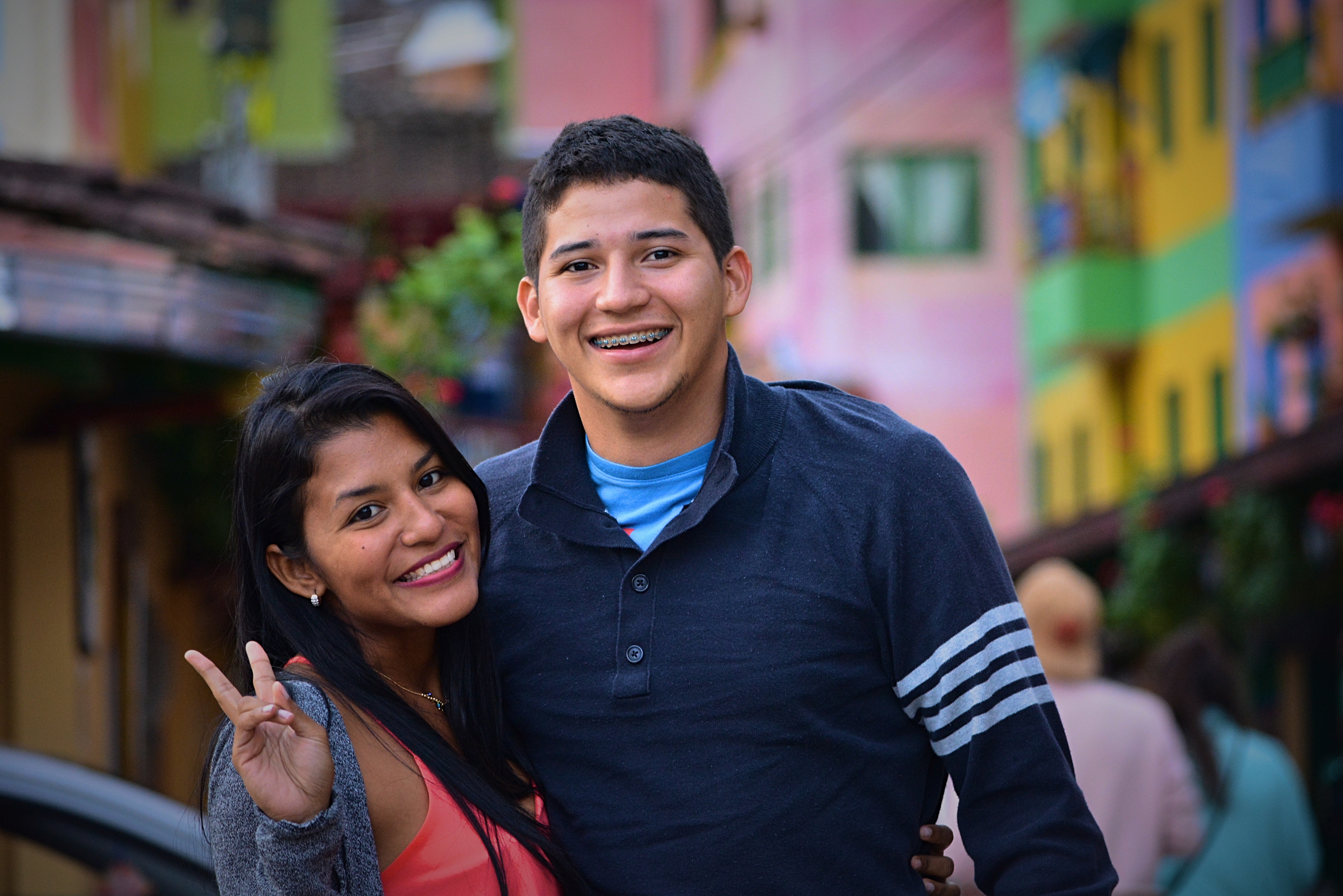 Let’s try one with a bit more of the “human element.”

People love people. Well, not always. And after just barely making it through the Thanksgiving season in one piece (family dinners, ugh), I can understand that on at least some level.

So rather, people love to know that they’re working with people rather than some giant faceless capitalism machine.

It’s the human element. And it sells.

Now, one way you can add a bit of the human element to your sales funnel is by injecting some personality into the copy. Throw in a colloquialism or two. Use humor. Pepper your pages with vivid imagery, alliteration, and symbolic language.

But we’re talking about optimization techniques you can pull off in an afternoon here. So depending on how much of a wordsmith you are, that might take a bit longer.

So instead, try this… add pictures of real-life people to your website.

And when you pop a happy face onto your landing page, it can lead to serious conversion jumps. That goes double for when the person on your page is actually doing something human too (running on a road or holding a baby).

Case in point: check out this tiny change that boosted conversions by 66%! 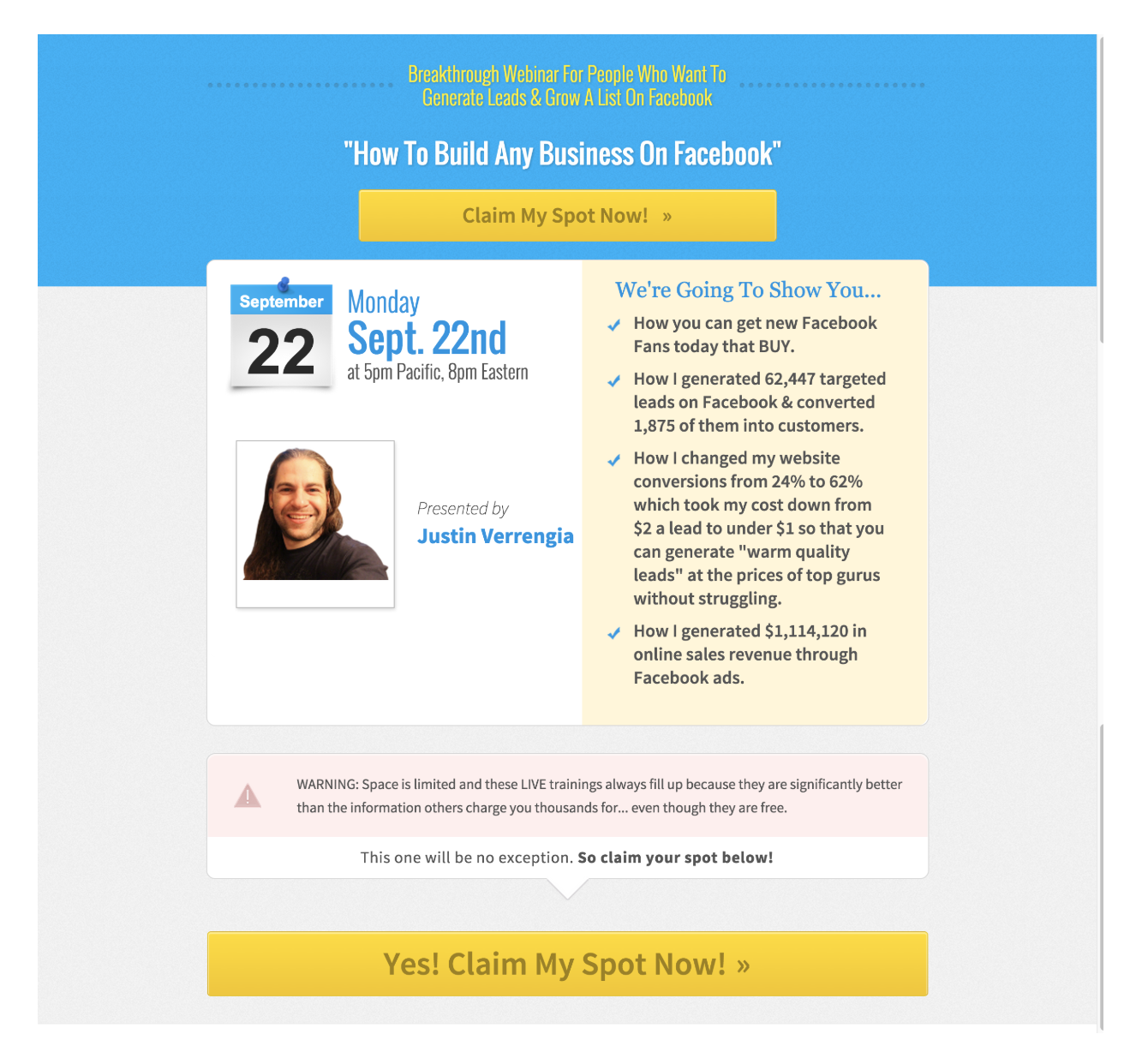 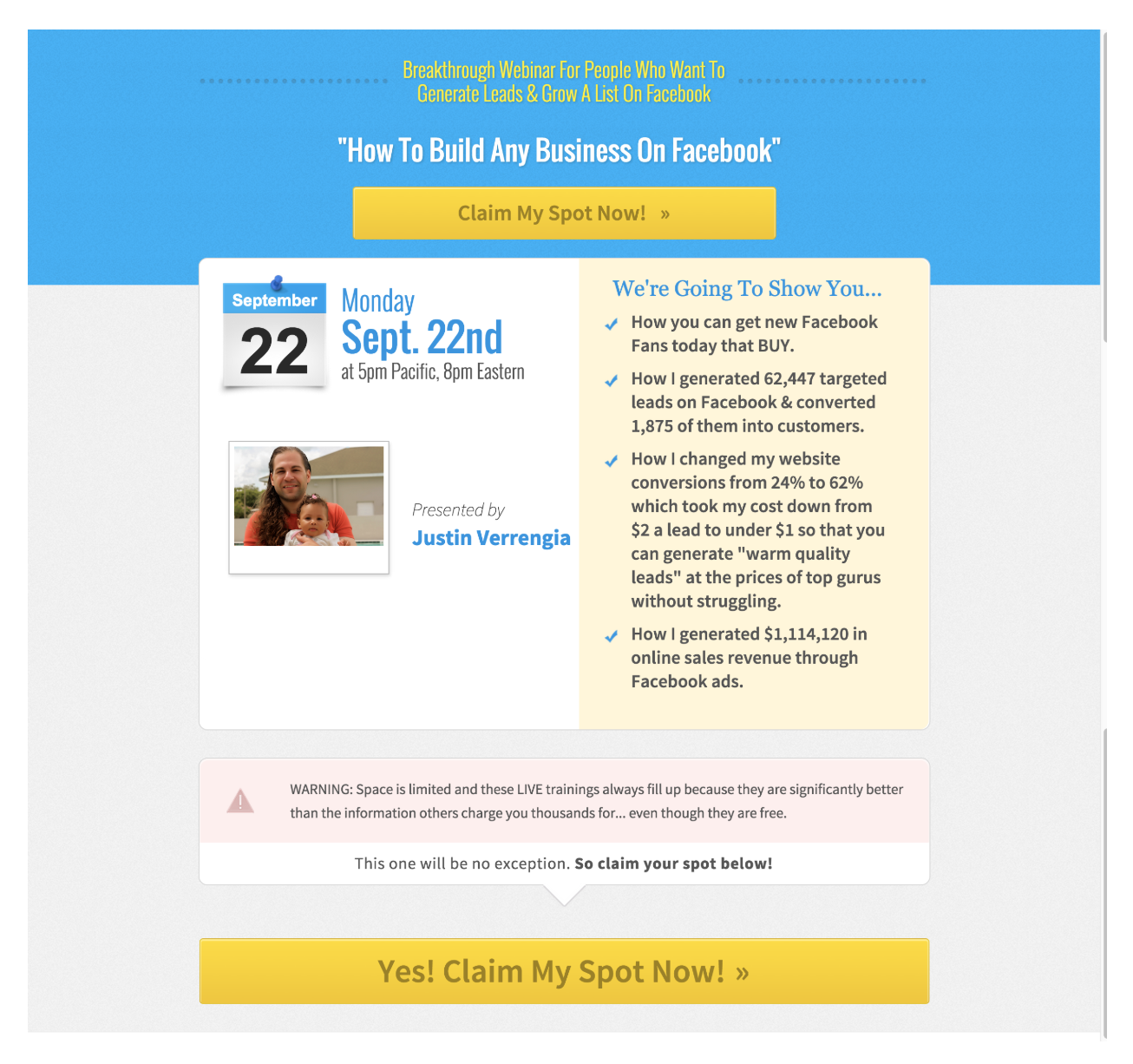 Look at that. Children really do make all the difference, huh?

So, if you don’t have any smiling faces on your website, find some headshots of past clients on LinkedIn and throw them onto your website. It’ll only take a sec, I promise.

And if you can get pics that show these people for the living, breathing humans they really are, then all the better.

This is the second tweak coming from Matt. And like the last tweak, it deals specifically with one of the most important parts of any funnel: the lead magnet.

This law states that no matter what it is you’re selling (mug koozies, consultation services, or even luxury yachts), people love options.

Different customization options, additional (or fewer) services, tiered package offerings—people like to choose from a range (eh?) of products rather than be stuck with with only one option.

One exceedingly simple optimization technique you can use in your sales funnel, then, is giving your visitors more options on how to consume your lead magnet.

You’re checking out a service for, say, an instant funnel marketing team. And as you’re clicking around, you keep seeing an offer for a free guide to sales funnels on the sidebar. “Interesting,” you think. But unfortunately, your time is super limited thanks to your 1.5 hour commute each way.

Now, normally that’d be the end of it. Maybe a concentrated string of nurturing emails could get you to opt-in over time. But for most, making an initial evaluation of something sets a foundation that’s difficult if not impossible to tear up (i.e., you probably won’t ever change your mind).

And so, you move the cursor up to that X on the window so you can start your day. But suddenly, an exit pop-up window appears.

It looks like that free guide is available in audio format too! You could even listen to the whole thing on your way to work!

Click. Opt-in. Value. And now you’re a customer for life.

See how that works? It’s practically the same product but offering it lets you appeal to a much wider audience.

And all you have to do is record yourself reading through the original lead magnet. That’s an hour or two of your afternoon. Tops.

So give it a try. You might be surprised by the results.

This one is bound to be a bit of a surprise for a lot of you.

Counterintuitive as it may seem, increasing the number of form fields on your opt-in can actually boost your conversions.

For example, one info product actually saw a 120% jump in conversions just by adding fields for a first name and an email address.

Check it out below. 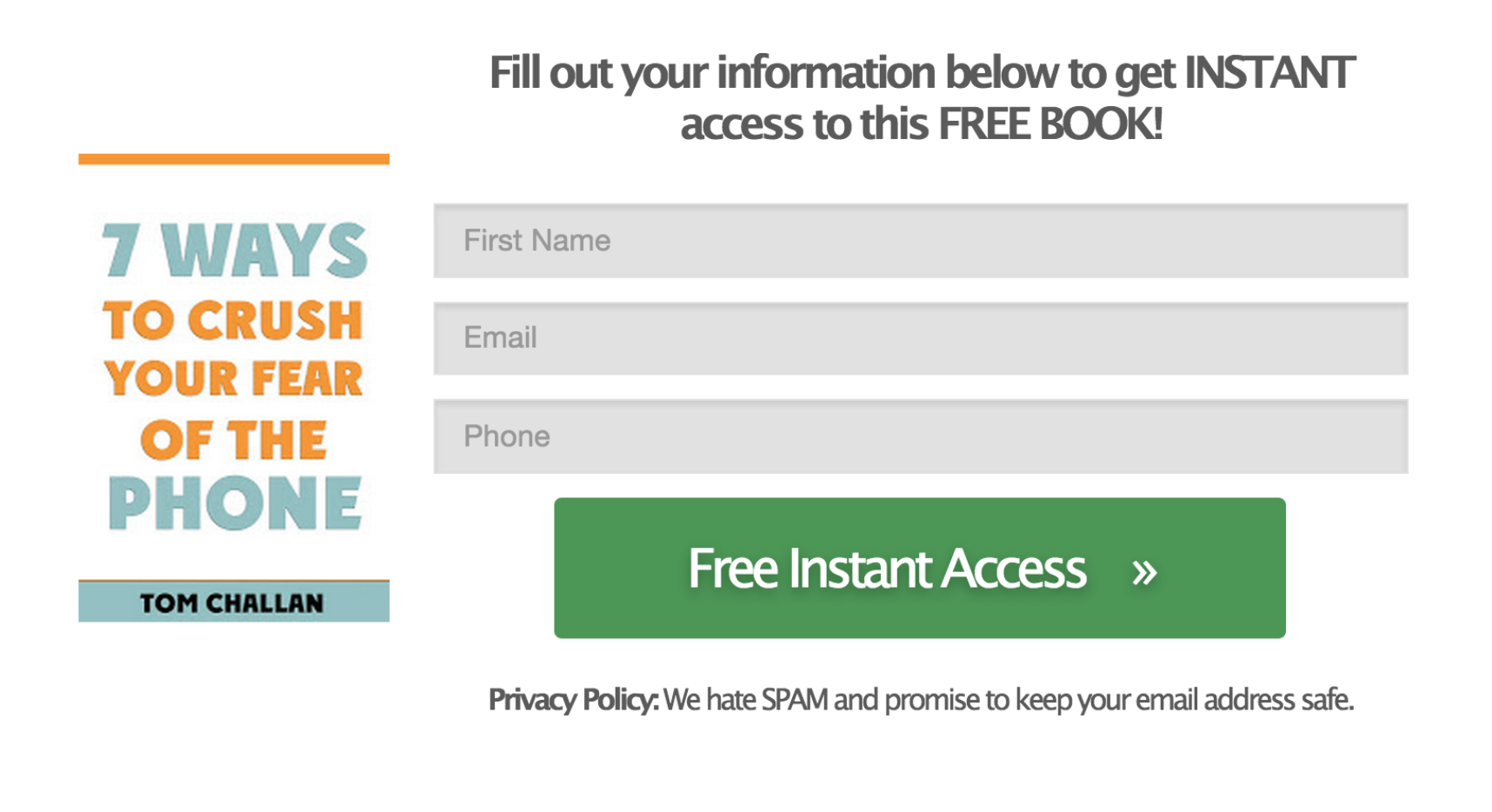 So, why does this work again? Well, the theory is that adding more form fields actually increases the perceived value of the product. If it requires a little more commitment to get, then it’s got to be worth it, right?

That being said, you certainly don’t want to overdo it. Because adding too many form fields (one of the most common conversion-hitting mistakes) can lead to the opposite effect.

While more form fields can do wonders for helping you segment your audience and increasing the perceived value of whatever they’re opting into, they can also be daunting. Overwhelming. And imply an uncomfortable level of commitment.

When it comes to lead magnets especially (reasonable value for minimal commitment), you definitely don’t want to come on too strong. Otherwise, no one will click. And that means no one will get sucked into your funnel.

So there you have it!

5 easy-peasy optimization techniques you can use to boost your conversions.

Plus, each is so simple, you can pull them off in just a single afternoon. You could even do them today!

And if your audience responds to the changes you make, you could be seeing some massive improvements in your sales funnel performance in no time flat.

Remember: the smallest tweaks can lead to the biggest changes.

What kinds of optimization techniques have you seen great results with in your funnel? Which of these have worked the best for you? And what middle-school science experiments were your favorite?

Let us know in the comments below.